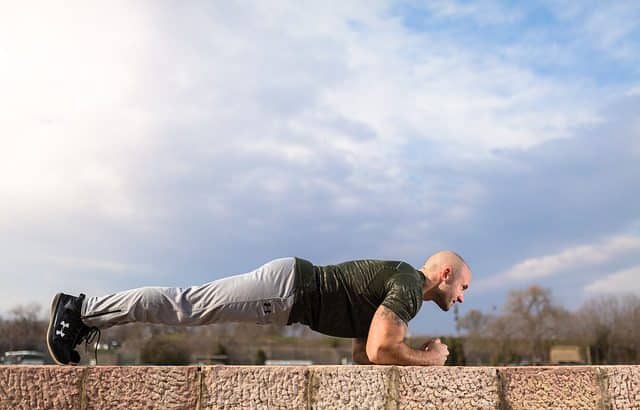 Planks are the perfect abdominal and core exercise for seniors. Read on to find out why!

The abdominal and core muscles consist of several layered muscle groups that have a very important function of keeping us upright and protecting the spine and the internal organs.

Weak abdominal muscles can cause an abundance of problems, ranging from mild lower back pain to hernias and debilitating back pain as well as increased risk of injury during strenuous exercise and activities.

Strong abdominal muscles are important for everything from simply keeping balance to walking, lifting things and performing day to day activities.

But there are certain precautions older people should know about abdominal exercises. The main one being that as we age, our spines deteriorate and become less mobile.

The intervertebral discs compress and the vertebrae start to fuse together to prevent excess movement that could irritate or injure the nerves.

When you perform abdominal movements like ab crunches or leg raises that require spinal flexion, you can irritate these fuse structures.

But how do you strengthen your abdominal muscles if you can’t perform ab exercises? With planks of course!

What is a plank

Plank, also called a front hold, hover, or abdominal bridge is an isometric exercise that mainly targets your abdominal muscles. In reality, it targets almost the whole body, so it’s a very effective and functional movement.

Because the plank is an isometric exercise, it is performed in a stationary position. Your muscles work to hold that position against gravity.

But how do you include progressive overload in an isometric exercise where you just stay still? Well, there are a couple of methods.

The first is movement variations of different difficulty. The planks can be made harder by adding leverage, just like in the push-up. It can be performed on your knees first and the transition to a full plank.

The second method is to add time. While increasing isometric contraction time is not the most effective way of actually increasing muscle strength, in the case of the abdominals it’s actually perfect.

This is because the main function of the abdominals is to be able to contract strongly when you are doing something that requires you to brace your midsection (like lifting something heavy).

Adding time to the plank will make this bracing pattern stronger but it will also allow you to hold it for a longer time effortlessly. Making it likelier for your abs to protect your spine during strenuous activities and even during lighter exercise.

Variations of the plank

The plank can be made in several variations that target the different parts of the core in varying difficulties. The general rule is that the further your support points are (knees vs feet), the harder the variation.

For seniors, there are really three useful variations that will get the job done easily.

The first is the forearm plank on knees. It is performed on the floor, with you facing the floor. This is the easiest variation because of the shorter distance between support points.

This means your abdominals have less bodyweight to support in the planks position and is thus easier.

The second variation is the regular forearm plank on knees. It is performed facing the floor but supported on your feet (or toes) instead of the knees, with the knees and hips fully extended.

This makes the plank significantly harder to perform as there is a large proportion of bodyweight to support and additional muscles involved.

The final variation is the side plank. It’s performed on your side as the name suggests. They should only be included once you can perform regular planks for extended periods of time. The side planks activate the obliques more.

This is because when you are sideways, the pull of gravity will naturally affect you in a unilateral way. In a plank, the most stressed muscles are always the closest to the ground. So if you perform a side plank on your right side, the right side obliques will have to work the hardest to support your body weight.

That doesn’t mean they are the only muscle group involved. On the contrary. The plank always involves most muscles of your body as stabilizers.

What muscles do the planks target

Like we established previously the planks use most of the muscles in your body to stabilize your trunk while maintaining the isometric contraction.

That said, the most important muscle groups involved are the abdominal muscle and the spinal erectors that prevent your spine from overextending while you hold the plank.

The main muscle doing the work is the rectus abdominus. It’s what generally speaking is considered the “abs” or a six-pack on a lean and muscular person.

The transverse abdominalis muscle is also highly active when you contract your core. It is what’s referred to as the “deep abdominal muscles”. It essentially forms a belt around your midsection that provides a lot of support when contracted.

The external oblique muscles are also active, especially in the side plank.

The plank targets especially spinal erectors, the long muscles that run along your spine and are responsible for extending your spine as well as supporting it isometrically.

Because planks are usually done on your elbows, the muscles of the shoulder girdle are also very active because they have support your body weight to prevent your chest from dropping down.

The glutes are very active in a full plank as well as the quads and hamstring because they have to keep your hips supported in an extended position.

How to perform the plank

The modified plank on knees is easier to perform due to the shorter leverage. It is performed as follows:

The regular plank is significantly harder to perform than the plank on knees. The key thing is that your legs and hips are more active in this variation because you have to support your whole body weight between your feet and elbows.

It’s called a plank because the aim is to have your body as straight as a plank by the way, so focus on keeping your back and hips straight as possible.

The side plank is performed on your side like the name suggests. It’s a variation of the regular planks done on one side at a time.

Beware that they are demanding on your supporting arm because it has to support a large proportion of your body weight. If you have any shoulder problems or elbow arthritis, don’t attempt these. Use common sense and listen to your body.

You shouldn’t try to perform side planks until you have mastered the regular planks variations first.

Are planks useful for seniors?

Planks are very useful for seniors because they are pretty much the only effective abdominal and core exercise that don’t require spinal flexion and extension.

This means there is less chance of aggravating any existing lower back problems or creating new ones. Speaking of back pain, the core muscles are the most important part of your spinal health.

Having strong core muscles will protect your spine both from injuries and bad posture that could lead to increased degradation and back pain.

The core muscles are also involved in virtually everything you do. Simply standing or walking will use these muscles and they are very important for balance and strength training.

If you want to perform activities like playing tennis, running, kayaking or strength training, you will need a certain level of core strength to perform them safely and effectively. Planks will help you achieve this.

Having a strong core will also help you keep a better posture and suck in your waistline. We all want to look our best, don’t we?

That’s it for the planks! I hope you found this tutorial useful and will include them in your exercise routine. The best part is that plank are really easy to do at home while watching TV for example.

You can literally improve your core strength and keep your abs in good condition by dedicating a minute a day for planks. That’s right, A MINUTE! I’m sure everyone can spare a minute for their health each day.

There really isn’t an exercise as time-efficient as the plank because you can do it anywhere and that daily minute is actually enough for improving your core strength. Of course, it’s not optimal, but it is enough.

The core muscles are the most important muscle for your health right after the legs, so there is no excuse to not do planks. If you simply do 20 squats and a minute of squats every evening while watching telly, you are actually doing a good amount of strength training for improving and maintaining health.

So get a timer or use the one in your activity tracker or Fitbit if you have one, an try to perform a plank for a minute every day! Ad seconds until you can keep the position easily for the full minute.

If you want to take it further than that, I suggest you download and read my free weight training routine for seniors. It’s really simple and easy to perform at home or at the gym.

If you found this article useful, please bookmark my site and subscribe to my newsletter. Social shares are also appreciated!