Welcome friend If you are looking to get six-pack abs after 50 you’ve come to the right place! In this article, you will learn what it takes.

Ah, the famous six-pack. The ultimate proof of superior fitness. Or that’s at least what the magazines tell you… Either way, there are probably not many people that wouldn’t choose to have perfect six-pack abs if they had the choice.

I’m sure you’ve known people in your life with six-pack abs. At least someone who is lean with clear definition but maybe even someone with bulging defined abs and adonis belt.

But the chances are you never achieved a similar definition and leanness yourself. Or maybe you had a six-pack in your youth but it’s been long lost under a layer of blubber and you are wondering is there any chance of getting it back at your age.

I’m not going to keep you in suspense. It’s absolutely possible to have and get six-pack abs in your fifties. But there are some considerations to if it is realistic or healthy to achieve them. Or even desirable.

If you want to learn what it takes and if you are a prime candidate for getting defined abs, read on!

What Exactly Is a Six Pack

Let’s start by shortly talking about what the “six-pack” actually is. I’m sure you know that it refers to your abdominal abs and the pattern they have. Like this: 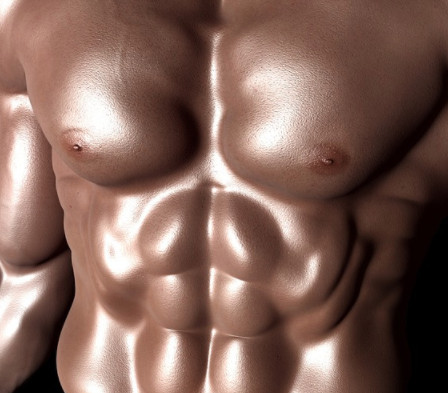 Everyone has abdominals (well, almost everyone), so why doesn’t everyone have a six-pack? Because it depends on muscle size and the amount of subcutaneous body fat and skin over the muscle.

Pretty obvious and common knowledge, but I thought it would be important to point this out so we can look at each of the components separately to understand what exactly creates six-pack abs.

This is also important because people have crazy ideas on how to achieve six-pack abs. The typical being doing tons of crunches or using localized fat burning products to “tone the muscle” and to “melt the fat”. If you’ve guilty of this, don’t worry, most of us are at some point.

But the truth is that building muscle and fat loss are pretty simple processes that are hard to complete consistently. You can’t spot-reduce fat and you can “tone” muscle. More importantly, it’s very hard to do both simultaneously, lose fat and build muscle to any significant degree.

By the way, not everyone’s abdominals for a perfect “six-pack” form. The iconic shape comes from the shape of your rectus abdominis muscle and its muscle bellies and ligaments. Some people have symmetric patterns that for six clear blocks.

Some can have a symmetrical “eight pack”. Some people will have an asymmetric row of a variable amount of blocks even when very lean and muscular. Just so you know in case you have a clear definition but not exactly 6 symmetrical blocks.

To build a six-pack, you will need to build muscle mass around your core, mainly the

Most people try to build muscle completely wrong. Especially the abs. They will do tons of crunches every day, which will only work for a while to build muscle.

To actually build any meaningful muscle mass, you will need to train your abdominals progressively a couple of times a week and either be in a caloric surplus or have enough fat on you to fill the energy demand of building muscle.

While you are building muscle you cannot lose significant amounts of fat because you will need a caloric deficit to lose fat. So you need to choose which you want to start with.

If you’ve been sedentary and have a lot of fat, you might be able both for a while due to the beginner muscle effect and your bodyfat stores but it won’t last long.

To get the six back visible, you will need to lose most of the fat around your midsection. The problem is that spot reduction is impossible and the fact that our bodies like to store our excess fat mainly around the midsection.

This means that to get your abs visible, you will need to lose a lot of fat around your body, not just a few (or 20) pounds in front of your abs. To make things worse, most people have a lot more fat on them than they think.

So to get visible abs you will likely need to lose a lot of weight, without loosing too much muscle. What does this mean exactly?

Well if you stop eating and drop too much weight, you will burn a lot of muscle along with the fat. You will end up skinny-fat and not with a six-pack. What you need to do instead, is to lose body fat slowly and consistently for several months or even years to lose all the fat while maintaining muscle mass.

Sorry, that’s just the way it is. As I said, it’s hard to build muscle and lose fat consistently. If it wasn’t, everyone would be fit and lean with six-pack abs.

Finally what affects the visibility of your abs is your skin. As you surely know, aging will make your skin less elastic, typically causing wrinkles.

Skin can bounce back from significant fat loss but the more weight you have to lose and the older you are, the harder it gets. So if you are significantly overweight (or have been) the loose skin can prevent you from having a six-pack.

The only solution to this is surgery, which I definitely can’t recommend for vanity reasons alone. If you have so much skin that it affect hygiene or mental health, then maybe, but please think hard and long if it’s really worth it. Surgery always carries risks.

Finally, there is genetics. The truth is that some people will never get a perfect six-pack even if they get very lean and muscular because of genetics.

Your body might want to hold on to the very last bit of body fat on your abs, making it impossible to get definition without sacrificing health.

Some people have serious trouble building muscle due to genetics. If you can’t build muscle, you will have a very hard time getting abs to show.

It’s also possible to have exceptionally thick skin which will sag over your abs, especially as you age. And genetics will definitely affect your ability to lose fat and build muscle as you age.

So can you actually get a six-pack after 50? It’s possible, yes. But not realistic to some, if not most.

Here’s the deal. Having a six-pack essentially means you have a relatively low body fat percentage and relatively high muscle mass in your abdominal muscles.

The truth is that it becomes harder to lose fat and to build muscle as you age. But for general health and performance, this effect will be relatively mild. But building a six-pack basically means becoming a bodybuilder for your core.

The hardest part by far is the fat loss. You can basically have a six-pack with very little muscle mass if you achieve a very low body fat percentage (below 10%). But it’s much easier to achieve a six-pack if you have a good amount of muscle mass underneath. Many bodybuilders have clear ab definition even over 15% body fat due to the high muscle mass that gives definition under the fat.

The problem after 50 is that while you can still burn fat quite easily to have healthy body weight and below 20 % body fat, it becomes hard to achieve a really low body fat percentage. This is especially if you’ve been overweight or obese for a long already.

Also if you are female, menopause will make both losing fat and building muscle drastically harder. But there’s still hope.

If you’ve been athletic and relatively lean your whole life and just gained a few pounds on your middle during the busy years, it’s quite realistic to achieve a six-pack even after 50. It’s just a matter of losing the fat and gaining some muscle mass on your core.

On the other hand if you’ve never been very fit and have a lot of fat to lose, I hate to break it to you. It might be too late to get a sixpack.

But don’t worry if this is you, losing weight and gaining muscle is always beneficial and healthy and there are way more important reasons than vanity.

And let’s face it, vanity is the only reason people try to get a six-pack, especially in their fifties. Unless you are an actor or a model, but then you would know all this already.

The truth is that having a six-pack tells nothing about your health or performance. It just tells you are lean and have a bit of muscle, which is of course a good sign of fitness but not a requirement. You can be unhealthy and have a sixpack.

There are tons of bodybuilders who have achieved their six-packs with steroid use and eating unhealthy amounts of unhealthy food. They might even smoke and drink. Do you think people like this are healthy simply because they have a six-pack?

You can be strong, fit, muscular with good cardiovascular health and have a bit of fat on you. Or you can be normal weight regular joe with an active lifestyle and be completely healthy without a sixpack.

Losing that much fat over 50 can be unhealthy as it can affect your hormones and cause malnutritions for example. So think hard if you really want a six-pack just to show it off at the beach once a year or if you would be happy with a strong and fit body with a bit of fat on it.

The latter allows you to actually enjoy food for example. Just saying.

That’s it for today. Thanks for reading and if you found the post useful, remember to share it with your friends who are tormenting themselves trying to achieve a six-pack!